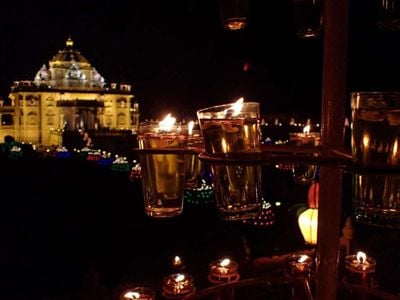 This year’s Diwali celebrations, which happened Saturday night, were quite low-key, devoid of the pomp and colour, fireworks and crackers that characterise the annual Hindu festivities.

The festival is normally celebrated with a lot of fanfare, including card parties, with the faithful catching up with their relatives and performing ceremonial worship (poojas).

But on Saturday, the celebrants avoided crowded parties and mingling following a directive from the Hindu Council of Kenya (HCK) to observe the Covid-19 health protocols.

HCK national chairman Kamal Gupta, in a letter seen by the Nation, had asked the Hindu worshippers not have fireworks this year, but instead donate to charity

“HCK has worked through all these months of the pandemic bringing light to the lives of the people by supporting them in various ways. In this regard, the council, together with all five branches and over 150 members’ institutions, will celebrate Diwali on November 14 by organising prayer and conducting mega Diwali donations countrywide,” said the letter dated October 26.

Ordinarily, Kenyans would have witnessed bustling lit-up markets and processions in the streets with colourful carriages, but now, everyone is social-distancing.

Diwali, known as the Festival of Light, is one of the most popular festivals of Hinduism, usually lasting five days during the Hindu Lunisolar month, Kartika.

It originated from various myths in the ancient times and symbolises the spiritual “victory of light over darkness, good over evil, and knowledge over ignorance.

Preparations for the day begin with home decor, purchase of new clothes and gifts for the family and even self-beautification among the women, amid blaring music.

Food is central in Diwali celebrations. Sweetmeat shops at the time get overwhelming orders of sweet mithai delicacies.

The height of the celebrations come in the evening when families gather to burst crackers at designated places.

The Hindu believe that firecrackers notify the gods of the plentiful state of people living on earth, while the lighting of lamps is an expression of gratitude to the heavens for the attainment of health, wealth, knowledge, peace and prosperity.

But this year has seen relative quiet, thanks to Covid-19.

The custom of gambling is also common during Diwali with the motivation from a historical belief that Goddess Parvati used to play dice with her husband, Lord Shiva.

It is believed that ‘whosoever gambled on Diwali night would prosper throughout the ensuing year.’

Although it is not a gazetted holiday, Kenyan Hindus have always taken a day off to take part in the celebrations.

COVID-19: New wave of restrictions in US amid latest surge | US & Canada