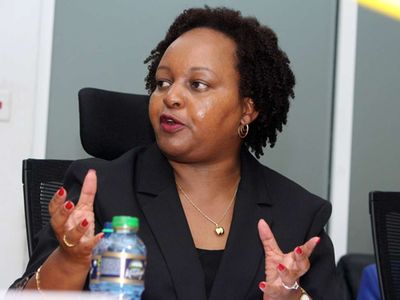 Kirinyaga Governor Anne Waiguru has urged Kenyans, especially residents of Mt Kenya Region, not to allow the ongoing debate on the Building Bridges Initiative (BBI) to divide them.

The governor said that every person should take time to read the proposals in the BBI document in order to understand what is contained therein and know the benefits that the proposed constitutional amendments will bring them.

She said that BBI aims to unite Kenyans and, therefore, politics should not be allowed to divert the intended purpose of the initiative. She noted that when the time comes, citizens will be allowed to vote for the document or reject it in a referendum.

“The most important thing is maintaining peace in the country even as different people and groups lobby to have their interests incorporated in the [proposed] constitutional amendments,” She said.

Ms Waiguru was speaking at Kiangai Primary School in Ndia during the funeral of the late Kirinyaga County Director of Planning Caroline Mathenge.

At the same time, the governor said that both the Kirinyaga County Assembly and the executive are working together in harmony and that there is peace and cohesion in the county. She thanked elders from Mt Kenya Foundation who played a pivotal role in bringing unity between the two parties.

While paying tribute to Ms Mathenge, Governor Waiguru said that the county has lost one of the most dedicated officers who played a great role in the implementation of key development projects. She said that Ms Mathenge was in charge of many of the donor-funded projects in the county for which she helped in formulating their proposals.

“She was one of my favourite staff members whose performance was exceptional and whose gap will not be easy to fill. She was a true example of what a civil servant should be and as a county government, we are deeply saddened by her demise,” Ms Waiguru said.

The governor also urged Kirinyaga residents to comply with all Covid-19 prevention measures, noting that infections are spreading fast countrywide.

She told residents to ensure that they wear masks properly, covering the mouth and the nose every time they are in public places and also keep social distance to avoid being infected.

She also noted that the Kirinyaga County government is making masks for distribution to children in early childhood development education centres once the schools reopen.