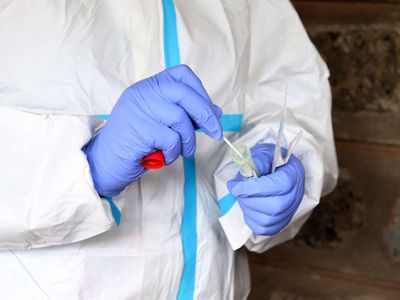 Operations at the lands office in Siaya County have been suspended following the death of registrar Machora Mogare Oira on Thursday night.

Health executive Dismas Wakla said the county’s Covid-19 emergency response team identified 10 officers from the department, who were in close contact with Mogare.

He said they will be tested on Monday amid more contact tracing.

He travelled from Siaya to Kisii on October 30 and returned on November 3 but was feeling unwell.

“On the same day, he visited a private clinic in Siaya town, where he received treatment,” he said.

The following day, his illness persisted so he decided to travel back to Kisii to seek further treatment.

“It is reported that he was admitted to Kisii Level 6 Hospital where he tested positive for Covid-19,” he said.

Mr Wakla said Mogare was later taken to the facility’s isolation unit, where he died on Thursday night after suffering breathing complications.

Mogare’s younger brother George Oira said he was rushed to the hospital on Wednesday evening after his condition worsened.

“He had complications. Tests established that he was suffering from malaria and pneumonia, ” he said.

Mr Oira, who is the EACC’s Regional Manager for Kisumu, added that his brother was on leave when he fell ill.

He dismissed reports that Mogare had earlier been admitted to a hospital in Siaya.

“He was not in any hospital in Siaya, where he was based. He was at home on leave when he became sick,”  he said.

Among those who sent condolence messages to the family were Mr Wakla and his Finance and lands counterpart Adrian Ouma.

“The registrar was such a humble public officer. May his soul rest in peace,” Mr Wakla said.

The lands office was fumigated on Friday afternoon.

Pakistan says it has evidence of India sponsoring attacks | India