Police accused of arresting and torturing suspect to death 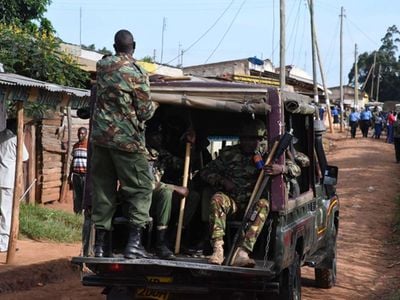 Police have been accused of arresting and torturing a suspect at Mbururu police post in Likuyani Sub-County in Kakamega and his body later found floating in River Nzoia.

According to the Independent Medico-Legal Unit (IMLU), the suspect, Dennis Lusava, was arrested on October 7, 2020 by officers from the police post.

IMLU Executive Director Peter Kiama said in a statement: “We are deeply concerned by the arrest, detention, torture, enforced disappearance and death of Dennis Lusava.”

The suspect’s body was retrieved from the river and taken to the Webuye mortuary. Police had earlier said the suspect had been released from custody on a cash bail.

But his parents disputed the account, saying that when they visited him after his arrest, they found him handcuffed, severely tortured and unable to walk.

When they went back the next day to check on him, they did not find him at the police post.

They were informed by police officers that he had been released. The family reported their son was missing and the incident triggered violence in which the police post was set on fire.

IMLU is calling for independent investigations to unravel the circumstances behind the arrest, detention, torture, enforced disappearance and death of Dennis and the arrest of and prosecution of the officers found culpable.

“We have reasons to believe that the officers at Mbururu police post who arrested, and are alleged to have tortured him, are responsible for his enforced disappearance while in their custody and for his eventual death,” said IMLU.

The Independent Policing Oversight Authority (IPOA) and the Witness Protection Agency have been asked to ensure all witnesses are protected from harm by the perpetrators.

Following the arrest and torture of the suspect, angry villagers raided the police post and set it on fire, destroying equipment, including firearms.

Eighteen suspects were later arrested in connection with the burning of the police post.

IMLU has called on the National Police Service to uphold the rights of persons arrested, detained or being held in custody as provided for in law.

“We call for a full inquiry into the circumstances that led to the burning down of the police post, including the relationship between the police officers and the community in the area. This will not only establish clear responsibility but also lay the basis for restoring police/public relations in the area,” said the statement.