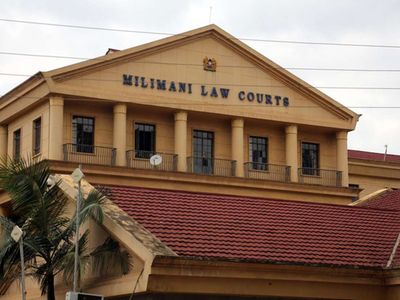 Kenya’s BBI and the EAC’s dream of regional integration

Kenya becoming a playground for cyberspies

The Court of Appeal has overturned decision of the Judicial Service Commission (JSC) to sack a chief magistrate for allowing an foreigner charged with violating immigration laws to convert his cash bail of Sh200,000 into a fine.

Mr Daniel Ochenja was interdicted in November 2014 by former Chief Justice Willy Mutunga while the dismissal was effected by the current CJ, David Maraga, through a letter dated February 15, 2017.

In the dismissal letter, Justice Maraga informed the magistrate that the JSC had established that he had engaged in gross misconduct and breach of judicial service code of conduct and ethics. The chief justice is the chairman of the JSC.

Mr Ochenja was accused of allowing release of the suspect notwithstanding that the cash bail had been forfeited to the State and therefore could not be converted into a fine in the absence of the court file’s copy of the receipt of the cash bail issued to the defendant.

After the sacking of Mr Ochenja by JSC, he challenged their decision before the Labour court which quashed it and ordered his reinstatement to work.

But a three-judge bench found that JSC breached various laws in the way it handled the disciplinary proceedings against Mr Ochenja, who was a chief magistrate based at the Milimani Law Courts in Nairobi.

“Interdiction of an employee must visit such employee with a lot of anxiety. He does not know what will befall him. Will he retain his job?” said the judges while dismissing an appeal lodged by the JSC seeking to set aside Labour Court’s decision to reinstate the magistrate.

Mr Ochenja had served for 26 years rising to the position of acting chief magistrate. The judges ruled that there was no evidence that he acted in breach of The Magistrates Courts Act or any other law in the way he handled the criminal case.

The court noted that he was career judicial officer of 26 years, a man of good conduct and there was no evidence that he had not performed his duties diligently.

The judges found that JSC conducted the disciplinary proceedings against Mr Ochenja irregularly and called witnesses to testify against him in secrecy as he was not invited to attend those hearings neither did he cross-examine the witnesses.

“There is no indication that the respondent was invited, he was not aware of the meeting and he in fact emphatically says that he was not invited. He was also not availed documents used by the committee or the panel,” said the judges of the second highest court after perusing a report tabled by the Chief Registrar.

The report was about disciplinary cases of four magistrates including Mr Ochenja and two clerical officers.

The hearings were presided by a chairperson and in attendance were six JSC commissioners and the Registrar.

The judges ruled that JSC breached the regulations of the Judicial Service Act which contain the procedure to be followed in a disciplinary case.

“In addition, Article 47 of the constitution has elevated fair administrative action to a constitutional right and administrators dealing with citizens or other persons can no longer ignore procedure or act in a way that is not administratively fair,” said the appellate judges.

They awarded the magistrate Sh2 million for breach of his rights.

However, they said JSC is entitled in law to commence a fresh disciplinary proceedings against the magistrate if it so decides but has to comply with the statutory provisions.

Kenya’s BBI and the EAC’s dream of regional integration

Kenya becoming a playground for cyberspies