Before Gen Badi was the great Col John Ainsworth 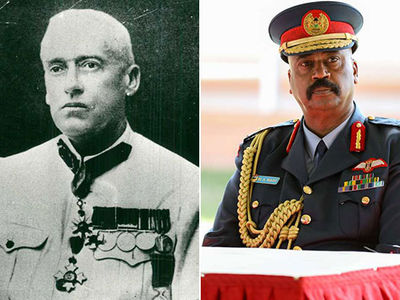 Nairobi has had its fair share of thugs masquerading as leaders. It has also had its fair share of military men out to make a difference, and it has also had military men who were spectacular failures. But how a capital city ends up with unimpressive, average, bogus, and mediocre leadership whose only legacy is land grabbing, wanton theft, ineptness and I-don’t-care attitude is intriguing. How cartels, busy-bodies and city militia, with the help of these elected leaders, run roughshod over taxpayers and residents is perplexing.

And now, it is the turn of Major General Mohamed Abdalla Badi, the Director General of the newly created Nairobi Metropolitan Services (NMS), to shape his legacy. How he transforms Nairobi will also be Uhuru Kenyatta’s legacy after he snatched it from the hands of Governor Gideon Mbuvi Sonko, the populist bling-bling politician now facing charges of corruption.

It was Franklin D Roosevelt who once said that “democracy cannot succeed unless those who express their choice are prepared to choose wisely”, and our previous attempts to get leaders run the city have always fallen short of expectations. After the first multi-party elections, Steve ‘Magic’ Mwangi thought he could do it but he lacked the support of the Ministry of Local Government, which actually ran that city with an appointed Town Clerk. That is how Mayor Mwangi’s “The Nairobi We Want Initiative” collapsed. John Kingo’ri, a semi-literate bar owner, took over as the new mayor, and ever since Nairobi has been in the Kayole drains.

There is no doubt that Badi has started well. He hopes to transform Nairobi into an environmentally smart city, collect garbage, dispose of it, and recover all grabbed land within the city.

I watched last week when he and President Kenyatta flagged off about 90 vehicles that had been written off and abandoned in a garage after tinkering with minor mechanical defects. Who runs a city where nothing is repaired? Also, this week, the city commissioned the new asphalt blending plant which has been used to rebuild roads. Why didn’t we think of that?

As Badi starts this arduous task, let me tell him the story of John Ainsworth, the no-nonsense administrator who was asked to come and save Nairobi town from turning into a “tin city”.

When the railway line reached here on May 1899 and the last camp, known as Elis Road Camp, was dismantled and brought to what railway engineer George Whitehouse referred to as “desolate, windswept swamp” , the pioneer town administrators faced many problems.

Forget the fancy stories about lions and frogs as captured in Elspheth Huxley’s White Man’s Country, in which she describes Nairobi as “a speck of frog invested swamp”. The main challenge was the uncoordinated tin shops that were built to cater for the needs of railroad officials, workers and their families. Also, homes for senior officers were built in Upper Hill and what was known as Milimani. A town was emerging without any plan, and that is how Ainsworth was asked to abandon the Imperial British East Africa Company (IBEA) offices in Machakos and come to Nairobi to flex his muscles.

When he arrived, he found a town emerging from a treeless plain. On some parts were marshy lands where lions waylaid other animals enroute to Nairobi River. He brought thousands of eucalyptus trees, which still dot many Nairobi highways, and started small-scale nurseries near his office, next modern-day Jevanjee Gardens. This was the first beautification effort for the city.

This nursery, later shifted to City Park as Department of Environment, was the source of flowers and plants for Nairobi until it was run down. Badi may have to go to City Park and revisit this Ainsworth dream of city beautification.

One of the problems Ainsworth faced was that the Uganda Railroad had secured rights to all the land for one mile on either side of the track. It was also raising revenue by renting plots since the railway was by then an unproductive enterprise. Ainsworth had to search for new ways to raise town revenue, and that is what we can ask Badi to do.

But even with these challenges, Ainsworth lined the muddy streets of the new railway town. Nairobi was still growing as an uncoordinated town because part of it was under the railway and the other under Ainsworth. If you want to see this challenge today, visit industrial area, where you will find national roads and county roads. It was this clash between the two powerful forces that, for years, almost led to the abandonment of Nairobi as health challenges emerged, thanks to rats.

“We had no definite scheme of layout approved, and consequently things just moved on and were liable to alteration to suit some particular fad or fancy,” wrote Ainsworth after he retired.

As one writer later remarked, “the railroad was neither organised for nor interested in caring for the non-railway people who lived on its land; and the government did not approve of the former’s land-lease policy and felt that it could better provide the services a growing community needed”.

Uhuru is doing what Sir Charles Elliot, the Commissioner of British East Africa, did between 1901 and 1904: assert the dominance of the government over the railroad and help manage the city for all the residents. This is because the railway administrators did not think much about Nairobi, it was just a halt on the railway line that sought to link Mombasa to the “Pearl of Africa” (Uganda), where the Queen’s subjects “held the faith and the flag”.

Soon Nairobi would be home to 31,000 Indian coolies imported to work on the railroad, and who opted to stay after its completion. It would also be home to indigenous Kenyans who had come to look for jobs either in the post office or the railway. Nairobi has since grown and hosts more than five million residents, which is a problem and an opportunity.

When Ainsworth arrived, Nairobi “had neither body to be kicked nor soul to be damned; it has neither taxes nor rates nor restrictions,” one observer wrote.

During the pioneer days the Protectorate Government was running the municipal business and normally received advise from a committee composed of two railroad officials, one Protectorate officer and three local merchants, who maintained order and enjoyed powers of annexation.

But later, these councillors objected to this merely supplementary status and were accorded the right to make the town by-laws. In 1901 they elected Tommy A Woods, a merchant, as the first mayor.

To his credit, Ainsworth organised the city businesses such that they could be properly assessed to provide the taxes needed for police protection, street lighting, and refuse collection. Unsanitary shacks and shops were summarily condemned and burned.

That is the same scenario that Badi is going to face in the city. He will have to plan it, collect taxes and garbage, and remove unsanitary shacks.

The City has luckily grown and has a good budget from the National government. When Nairobi started under Ainsworth, the first municipal budget was 7,161 rupees (about Sh150,000), which only paid for the uniforms and salaries of six Swahili and eight Indian policemen, two sweepers, and oil for street lights. A Mr Buddar Din had a 150-rupee-a-month contract to clean the streets and drains and hire rubbish collectors and street lighters.

These are still the main tasks that city fathers are supposed to carry. Ainsworth from the beginning appointed members of the municipal council and controlled its finances. He also managed public health and sanitation.

“The soil was poor for drainage, pit latrines often overflowed, and the small Nairobi River, polluted by cattle and people, contained bilharzia organisms, a disease of the lower intestinal tract. Plague often broke out in the Indian Bazaar. During the dry season, water was supplied partially by rainwater gutted on roofs and stored in tanks. The railroad brought in its own water from outside the city and made its stand pipe available to the general citizenry,” one writer observed.

More than 120 years later, Nairobi is facing the same problems that Ainsworth encountered. But they can be surmounted if Badi decides to sidestep the cartels and other ne’er-do-wells.