Only Kenyans can give Uhuru another term, Atwoli now says 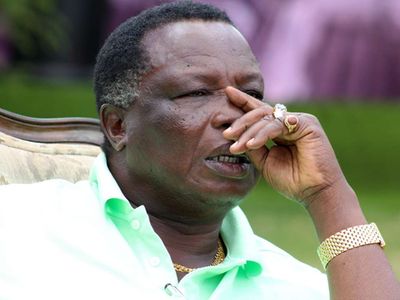 Trade unionist Francis Atwoli Sunday clarified that his remarks on the possibility of a fresh term for President Uhuru Kenyatta, if the referendum changes go through, were personal and “not said on behalf of any group.”

The Central Organisation of Trade Unions (Cotu) secretary-general said his remarks were not on behalf of President Kenyatta or the many delegations he hosts at his Ildamat home in Kajiado County.

“I spoke as Atwoli. I said Uhuru as a leader can decide, after promulgation of a new Constitution, to start afresh on a new term, if he so wishes. We cannot give him any fresh term. We have no such mandate. The mandate to elect leaders is for Kenyans,” Mr Atwoli told journalists at his home on Sunday afternoon.

The trade unionist has been hosting delegations at his home in Kajiado, all supporting President Kenyatta and his newfound ally Raila Odinga, who is leader of the Orange Democratic Movement (ODM).

Mr Atwoli was the first leader to suggest on Labour Day 2018 that President Kenyatta “is too young to retire”.

He argued then that letting President Kenyatta, who will be 60 when he retires in 2022, go without any well-defined role will be an exercise in futility as “his base will not accept it”.

“If we do not amend the Constitution, where do you think Uhuru will go and yet he is a young man? We must amend it and fix him somewhere or he’ll start disturbing those who’ll take over,” he said in 2018.

On Sunday, however, the official insisted that his remarks, then and now, were personal and “I do not speak on behalf of the President.”

“President Kenyatta has already pronounced himself – that he wants to go home after his term ends. I know he is a democrat. He has his own advisers and can make up his own mind,” he said, distancing his sentiments from those of the President.

In the interview with the Nation this week, Mr Atwoli suggested that President Kenyatta may use the Russia route where strongman Vladimir Putin swapped places in 2008 with Prime Minister Dmitry Medvedev, only to bounce back as president in 2012 after exhausting the initial maximum two terms in office.

“Uhuru can use the envisioned changes to remain President beyond 2022. Why are people pretending they don’t know that Moi, after the constitutional changes of 1991, remained in power for another decade?

“Once the Constitution is changed, we’ll begin from the default and nothing stops Kenyatta from running again, and we will support him,” Mr Atwoli said in the wide-ranging interview this week.

On Deputy President William Ruto, Mr Atwoli, a key Kenyatta-Odinga ally, said he is not ripe for the top job.

“Sometimes I ask myself at night, can Ruto really be President in 2022 [sic]? The answer is always no. Even the birds in my compound know he will not be President,” he said.

“He (Ruto) should probably try in 2027. He might have a chance. Right now he is not mature. He is chest-thumping and should borrow a leaf from former President Daniel arap Moi on how to be humble.”